38 Years of Publication of the Speleological Abstracts

Commission of Bibliography of the International Union of Speleology

1. What are the Speleological Abstracts?

The Speleological Abstracts (SA, in English; Bulletin Bibliographique Spéléologique, BBS, in French) is an annual review of the world’s speleological literature, published by the Commission of Bibliography of the International Union of Speleology (IUS). It covers approximately 5000 titles each year, and is usually accompanied by a short abstract in French, English or in some other non-Cyrillic language of the IUS. The selected titles are those which appeared or were available between January and the end of December of the abstracted year; the publication of the SA is scheduled for the summer of the following year.

2. History and evolution of the Speleological Abstracts

In 1969, Pierre-Jean Baron published a Swiss speleological bibliography that covered all the documents published in Switzerland between 1782 and 1968.

Since 1958, the Swiss national library in Bern has published annually in its “bibliographia scientiae naturalis helvetica” in its chapter “Höhlenkunde / Spéléologie ” (speleology) the speleological literature relating to Switzerland and created in collaboration with Raymond Gigon (1929-1981), then Reno Bernasconi. This annual national bibliography started being reproduced in the magazine Stalactite in 1972. The “bibliographia scientiae naturalis helvetica” stopped being published in 2005 and therefore its collaboration with the SA ended. Through the initiative of Raymond Gigon and Reno Bernasconi, two issues of the national speleological bibliography, named “Bulletin Bibliographique Spéléologique” and abbreviated BBS, appeared in 1968 and 1969. Unlike the other bibliographies, the BBS included a short summary of each described reference. 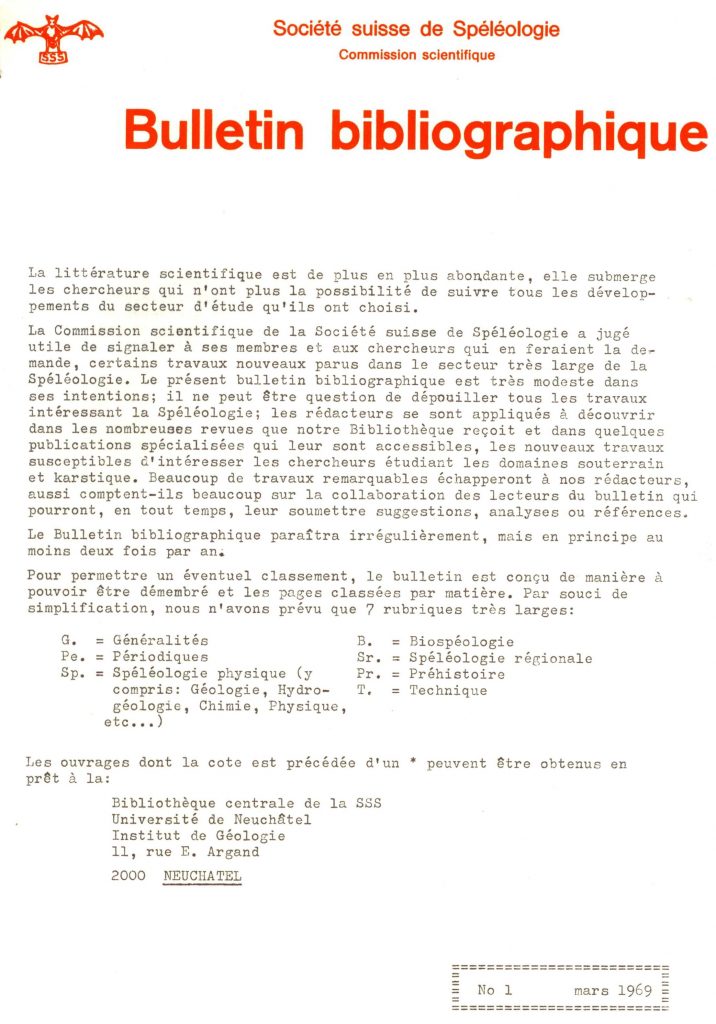 As early as 1950, Hubert Trimmel published a large speleological bibliography work in the series “Wissenschaftliche Beihefte zur Zeitschrift ‘Die Höhle’.” Unfortunately this annual publication got behind schedule and then stopped in 1964.

In 1969, Ray Mansfield published an international speleological bibliography work published annually. Current Titles in Speleology appeared from 1969 to 1990. CTS was soon appreciated in the English-speaking countries, because it appeared regularly and included references.

A first report on the activities of the commission was presented at the time of the 6th International Congress of Speleology in Olomouc in 1973 (Proceedings, vol. I: 55-56).

At the instigation of Raymond Gigon, all publications received at the library of the Swiss Speleological Society were consistently and systematically abstracted by Reno Bernasconi and Raymond Gigon. This lent an international dimension to the SA as early as 1970. The Bulletin Bibliographique Spéléologique /Speleological Abstracts appeared twice a year. A general index of the years 1970-1974 (issues 1 to 10) initiated by Raymond Gigon appeared in 1975 and covered 3,957 abstracts.

From 1975 on, volunteer contributors collaborated with the SA, which increased the number of abstracts considerably. The publications received at the library of the SSS were sent by mail to the collaborators to be abstracted.

In 1978, the SA began being published annually and each issue contained several indexes. The SA was soon appreciated in continental Europe because it appeared regularly and because the topics were current.

In 1980, the Fédération Française de Spéléologie (French Federation of Speleology), thanks to Claude Chabert, joined the editorial ranks to integrate the French speleological bibliography into the SA and to ensure its distribution in France. In 1988, it was the turn of the Società Speleologica Italiana (Italian Speleological Society) to do the same, through the efforts of Paolo Forti.

Around 1990, the British Cave Research Association (BCRA) stopped publishing “Current titles in speleology” and joined the SA. Thereafter, starting with the issue n° 32 (1993), four societies took part in the drafting and publishing of the SA: the Société Suisse de Spéléologie, the Fédération Française de Spéléologie, the Società Speleologica Italiana and the British Cave Research Association. For a few years, the SA was named: BBS/SA/CTS. Currently the French name is “Bulletin Bibliographique Spéléologique ” (BBS) and the English name is “Speleological Abstracts” (SA).

2.5 From index cards to the computer

Around 1980, the SA abstracts were machine typed on A6-format index cards, and sorted manually by chapters and sub-chapters. Each card was assigned a serial number, using a numbering machine. Raymond Gigon then typed the ready-for-publication final draft on an electric typewriter. After Raymond died in 1980, a professional typist carried out the final typing on A3-format pages, which were then photographed for offset printing.

In 1986, Reno Bernasconi bought his first computer. After some testing, he settled for a Macintosh SE, in spite of the small, built-in screen. With the help of this computer, he compiled the indexes (geographical, by author, list of the abstracted publications) and created the cross-indexes at the end of the sub-chapters.

The purchase of a laser printer made it possible to print the pages of the SA in typographical quality. The first attempts appeared in issue n° 27.

The technique of computer-assisted desktop publishing made great progress and starting with issue n° 30 (1991) Reno was able to directly print the SA on his laser printer. At his request, some macros were developed by a data-processing specialist in Filemaker 2, which subsequently facilitated the indexing work.

In 1995, CD-ROM 1 of the SA appeared. It included in the form of databases the complete contents of issues 28 to 34. This database created with an autoexecutable version of Filemaker Pro 2 was the first attempt to electronically distribute the data of the SA, with, of course, the capability of searching by author, classification, title, etc.

2.6 From the computer to the Internet

The Commission of Bibliography of the IUS publishes an annual SA, whenever possible during the spring of the following year. There is always a printed version, in spite of the printing costs and a progressively smaller number of printed issues. The International Union of Speleology financially supports the printing of the SA, and several national caving federations joined the editorial group, forming an important base of purchasers and contributors to the SA.

Practically since the beginning of the international SA, the Swiss Academy of Natural Sciences (ScNat) provided major financial support toward the implementation of the SA. Since 2008, this support benefited only the electronic version and it allowed the setting up of the infrastructure needed to look up data by Internet (a server, computer connection, subsequent developments).

The Internet version that will be available in the spring of 2009 will pick up all of the abstracts of the 18-year CD plus subsequent annual updates.

The annual CD-ROM can be bought separately or together with the printed SA. Each annual CD can be imported into the global CD (currently the 18-year CD) and constitutes an annually updated worldwide speleological bibliography.

Thanks to the increased computerization of all the steps needed for processing the abstracts, the Editor is trying to make up for lost time and delayed releases by immediately publishing the abstracts submitted by more than 30 collaborators.

At the beginning, it was Reno Bernasconi and Raymond Gigon, sporadically Grégoire Testaz (until 1973), Jean-Claude Lalou (1977-1978), and Bruno Klingenfluss (1978). After that, Reno Bernasconi, assisted by Christine Bernasconi, took on the editing and the coordination of the SA until 1998. After 27 years of editorial work and collaboration in the SA, Reno and Christine Bernasconi retired from it. The presidency of the Commission of Bibliography was entrusted to Patrick Deriaz during the International Congress in Brazilia. Patrick Deriaz, together with Daniela Spring, a librarian and professional proofreader, now continue producing the SA, assisted by more than 30 international collaborators.

3. The current implementation of the BBS/SA

Each collaborator directly enters his/her abstracts into a database, which is sent to the national coordinator where the abstracts are corrected and combined.

The data are then passed on to the President of the Commission of Bibliography who collects the data from the entire world, combines the regional databases and applies global corrections.

The database version has an export feature for the layout software that produces the paper version.

The CD-ROM or Internet version is created in another database named “consultation” by importing the entered data.

A complete version of the SA collection is available as of the beginning of 2009 on the Internet (www.ssslib.ch/bbs) and will be the subject of a presentation during the 2009 International Congress of Speleology.